We are open by appointment for eye examinations.
Appointments are recommended for optical services including glasses selection, adjustments/repairs, and pick up.

Secure masks that cover nose & mouth (no gaiters, handkerchiefs, or masks with valves) are required to be worn full time while in our office.

Please stay home if you are sick, if you’ve been exposed to someone who has COVID-19 symptoms, or if you are subject to quarantine.
Optomap screening ($34) for ages 5-39 & iWellness screening ($44) for ages 40 and up are required with comprehensive exams. 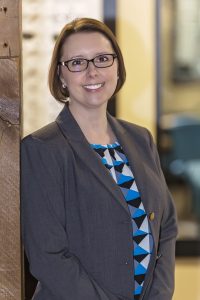 Dr. Sasha Radford has gathered her knowledge with the following achievements in education: graduated with a Bachelor of Arts in Chemistry with Honors in 1999 from the Eastern Kentucky University, graduated with a Doctorate of Optometry with Honors in 2003 from the Indiana University School of Optometry, and she became Board Certified with the American Board of Optometry in 2014. She belongs to the following associations: American Optometric Association, Illinois Optometric Association, and Bloomington Regional Optometric Society.

A Kentucky native, Dr. Sasha Radford began practicing optometry in Elizabethtown, Kentucky in 2003 and purchased her own practice in 2006. She was the managing optometrist at Dr. Sasha Radford & Associates for six years prior to joining Pontiac Family Eye Care in June 2012. During her tenure in private practice, she provided primary optometric care for patients of all ages. Through personalized and attentive patient care, Dr. Radford grew her practice into a thriving clinic.

Dr. Radford is a Rotarian and has served as Club Administrator for the Pontiac Rotary Club. Additionally, she has volunteered at Pontiac and Dwight Mosaic, serving individuals with special needs as well the Livingston County Humane Society. She currently serves on the American Optometric Association’s Commission on Paraoptometric Certification, which coordinates certification examinations for optometric staff nationwide.

In her spare time, Dr Radford enjoys reading, gaming, and traveling. She resides in Pontiac with her husband, Darren, and their well-loved cats.

“Your staff is very helpful, friendly and have smiles on their faces. Everyone really seems to enjoy working at Family Eye Care!”

You can schedule your next appointment with us online!